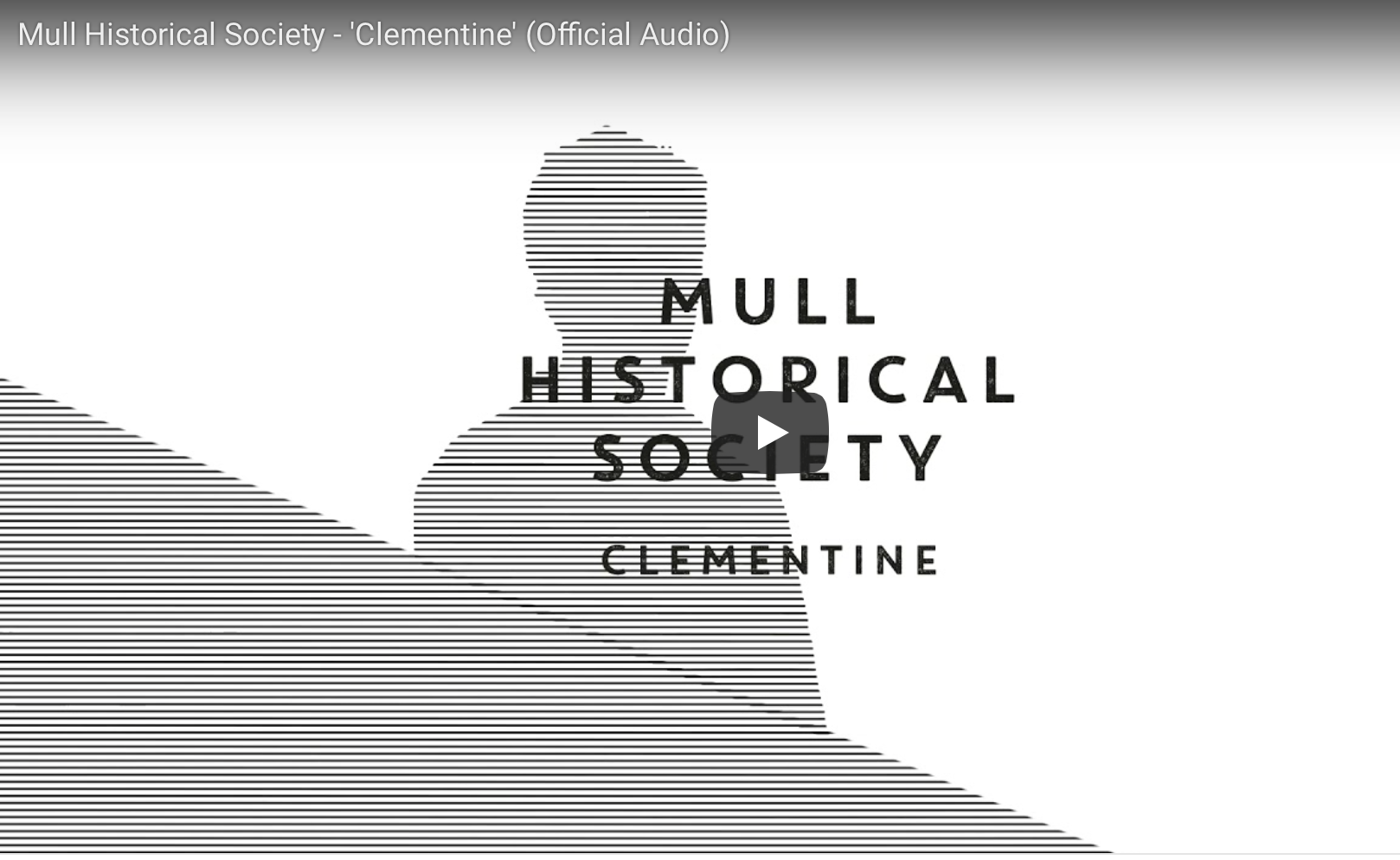 Excited to share the new Mull Historical Society track ‘Clementine’ ! Produced by Bernard Butler this is a cover of the glorious Sarah Jaffe track. It comes from the new album #Wakelines which is up for grabs now at Xtra Mile Recordings! The MHS UK Tour starts Sept 20th! BUY HERE

Listen to a stream of the track here

Mull Historical Society builds up to the release of his eighth studio album ‘Wakelines’ with a new track ‘Clementine’ available from today on all streaming sites and as an instant grat on digital pre-orders. You can hear it here: https://youtu.be/YpAVlrH7p2w

Talking about ‘Clementine’ Colin MacIntyre says: “I first heard this song not in my head. Which was different from all my other songs. Because ‘Clementine’ is my first cover. It’s by Sarah Jaffe, and I first heard it watching her supporting Midlake and she struck me with the truth in her performance. I told Bernard Butler about it while we were recording. The lyrics: ’50 states, 50 lines, 50 lies…’ feels quite timely. It was the last song we recorded for the ‘Wakelines’ album, in Bernard’s house. Bernard pressed record and Mako Sakamoto, our drummer in the sessions, yelled ‘1,2,3,4…’ into my headphones. We were off. It was very instinctive. Bernard’s family walked in during the recording but that was all part of it. Very sadly, Mako passed away two weeks ago. He was an inspiring and brilliant musician. He was in McAlmost & Butler and played on so many great records for over 25 years. So this is for him.”

The album, produced by Bernard Butler, is released on 21st September on Xtra Mile Recordings and the title track and current single has been featured heavily on Radio 2 and 6 Music with support from Gary Crowley, Liz Kershaw, Sara Cox, Alan Carr & Mel Sykes as well as across BBC Scotland and Amazing Radio. The Skinny has described it as “(Bernard Butler) has added a welcome polish and gloss to MacIntyre’s folk tinged tunes and it seems like diversifying into the written word has sharpened MacIntyre’s creativity.”

Mull Historical Society also heads out on tour on the 20th September playing tracks from the new record for the first time.   The dates kick off at the Hug and Pint in Glasgow with an album launch, moved from the CAA due to the recent fire at Glasgow School of Art and Bernard Butler will be joining him on stage in London on October 2nd at The Borderline. The Brit-nominated Beth Rowley is supporting in Bristol and London. 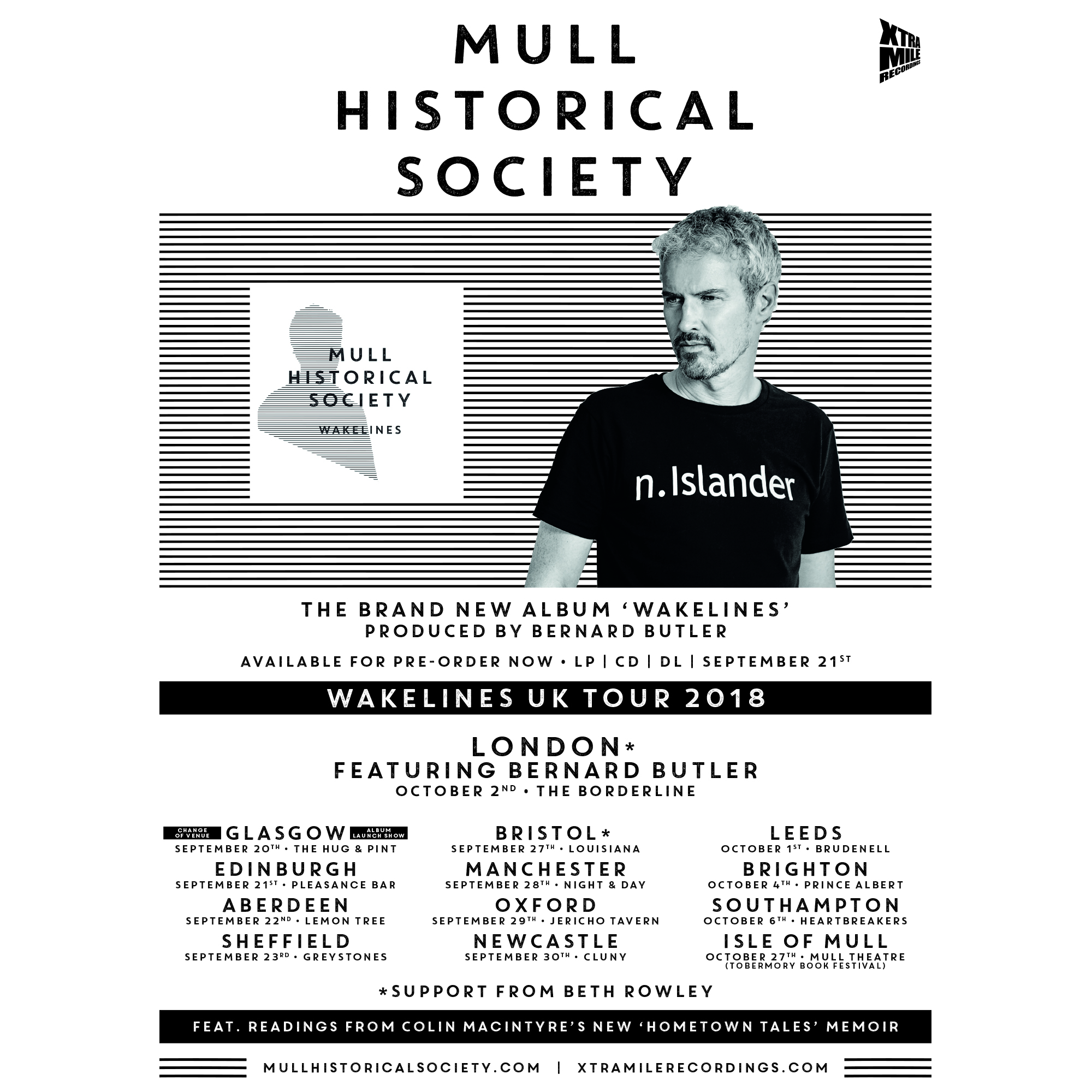 Colin MacIntyre is a multi-award-winning musician, producer, author and playwright. He has released eight acclaimed albums to date under the name Mull Historical Society, having achieved two UK Top 20 albums and four Top 40 singles, since his Gold-selling debut album, ‘Loss’. His debut novel ‘The Letters of Ivor Punch’ (W&N/Orion) won the 2015 Edinburgh International Book Festival First Book Award and he has just adapted it for the stage. He has been voted Scotland’s Top Creative Talent at the Glenfiddich Spirit of Scotland Awards, as well as into the Greatest Scottish Artists of All Time public poll, and has toured worldwide, including with The Strokes, Elbow and REM. His memoir, ‘Hometown Tales: The Boy in the Bubble’, and his first book for children, ‘The Humdrum Drum’, were published in June.