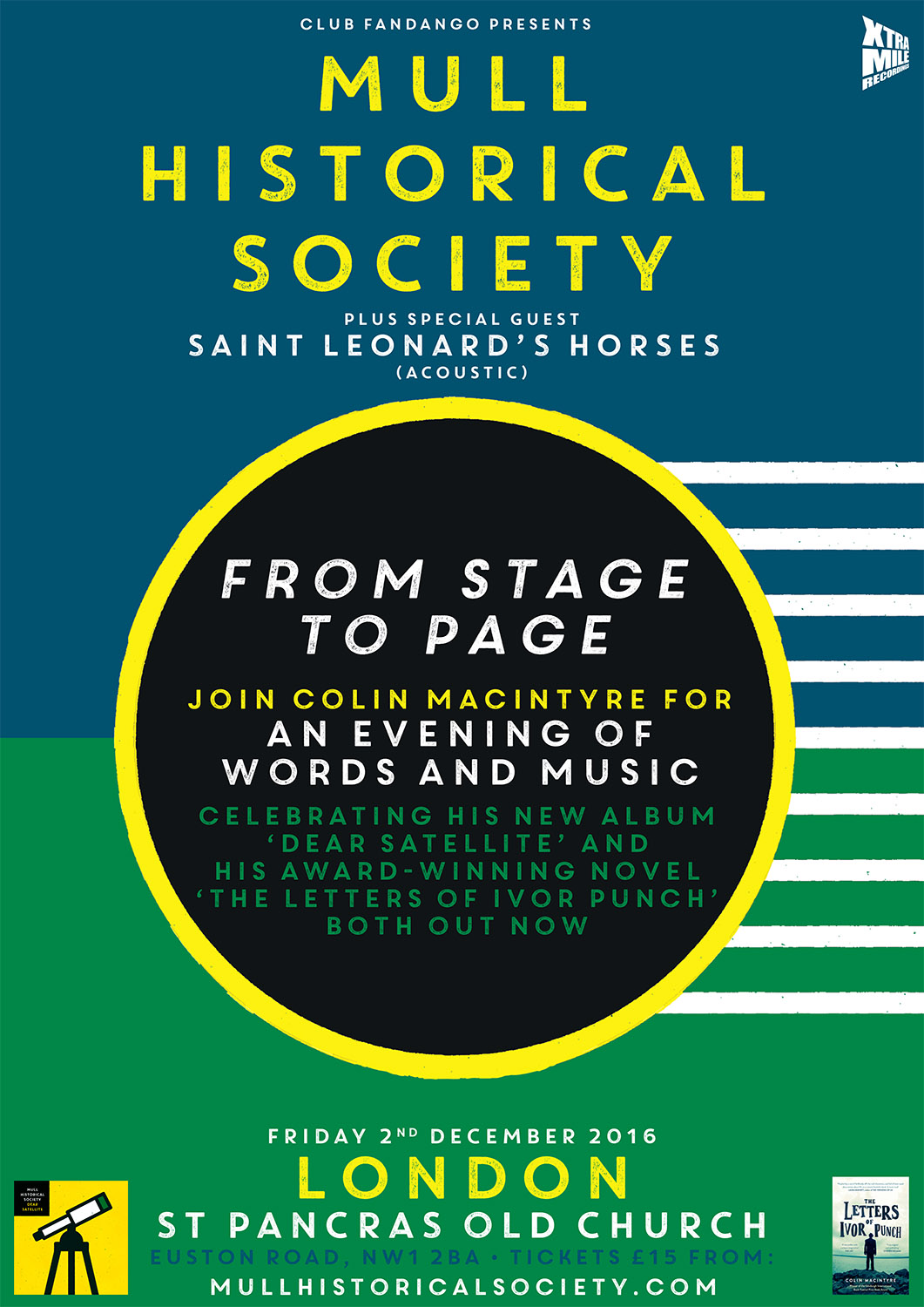 ‘From Stage to Page’ evening of words and music

Colin MacIntyre celebrates his latest album Dear Satellite and award-winning debut novel The Letters of Ivor Punch with a night of words and music at the beautiful and intimate St Pancras Old Church in London.

An evening of storytelling, reminiscence and looking ahead, Colin’s special year-end London show will have him playing old and new Mull Historical Society songs sprinkled with a little history and some related yarns. Combing through a 15-year back catalogue, from familiar singles like ‘Barcode Bypass’, ‘Watching Xanadu’, and ‘The Final Arrears’, to gems plucked from his latest like ‘Build Another Brick’, ‘The Ballad of Ivor Punch’ and ‘Sleepy Hollow’, it’ll be a night crammed full of lyrical tales. Complemented by award-winning prose and passages read by Colin from his first novel, it will be an enthralling insight into Colin’s larger-than-life talent and charming, modest persona.

The show and single celebrate a very successful 12 months. Starting last October, when The Letters of Ivor Punch won the Edinburgh International Book Festival’s First Book award, he then released seventh album Dear Satellite through Xtra Mile Recordings to wide acclaim six months later, in April. The paperback version of his novel came out a month later. Since then he’s played a handful of sold out shows, revealed a new electronic pop project called Field Stars, and will now play one of his final shows of 2016, both as a thank you and a farewell to a fantastic year.

“…this is the sound of an artist on top form. He really does deserve to go interstellar.”

“With the big indie-rock of ’Sleepy Hollow’ his journey continues more widescreen than ever.”

“Peopled by a cast of brilliantly off-the-wall characters, and full of keen-eyed observations about life on a remote Scottish island – and, by extension, everywhere. A must-read.”

Laura Barnett, author of The Versions Of Us (Praise for The Letters Of Ivor Punch’